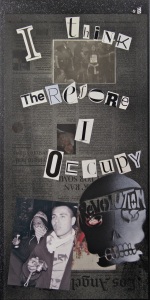 Seemayer’s energetic collages incorporate the slogans and signage that got the occupiers’ messages across, along with photographs and graphic stencils of revolutionary symbolism.